Unfortunately, the exact reason for ovarian cancer is not known. However, there are more than a few factors, which aggravate your risks of developing ovarian cancer. Your susceptibility to the disease is high if you have more than a few risk factors. The most pivotal risk factor for ovarian cancer is age. However, that is not all. There are several other risk factors, which you must be aware of. When you are aware of your risk factors, it will be easier for you to prevent cancer or detect it in the early stages. As you know, in the earlier stages treating cancer is somewhat quicker. However, if you let cancer aggravate to advanced stages, it will only get painful and fatal. 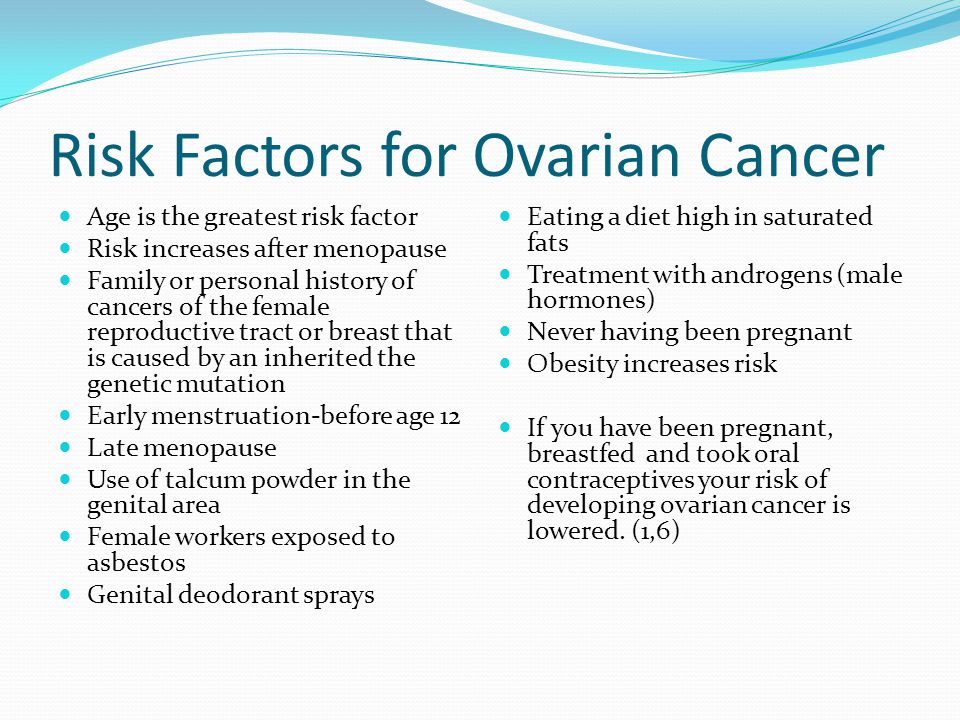 Usually, women over the age of 55 are at a greater risk of developing ovarian cancer. It primarily includes the women who have reached menopause. However, women between the age group of 40-50 are also at equal risk. In general ⅔ of the total cases of ovarian cancer are in women over 55 years.

Some women tend to develop ovarian cancer as an inherited faulty gene mutation on any of the two genes known as the breast cancer gene 1 – BRCA1 or the breast cancer gene 2 – BRCA2. Women who undergo BRCA1 mutation have approximately 35-70 percent higher chance of developing ovarian cancer. On the other hand, women who have BRCA2 mutations have about 10 to 30 more increased risk of developing ovarian cancer. However, if we look at the total cases of ovarian cancer, women who develop cancer because of this gene mutation are fairly low. But, it is always best to be cautious about this risk factor for ovarian cancer. Thus, you must discuss with your doctor and get yourself tested for both BRCA mutations. Your gynecologic oncologist or OB-GYN may help you with a reasonable solution.

Women who have inherited a genetic disorder like those mentioned above are at a greater risk of developing ovarian cancer. Lynch syndrome is primarily the reason for an increased risk of cancers of the gynecologic tract, digestive tract, and other organs. On the other hand, Peutz-Jeghers syndrome aggravates the risk of forming polyps in the digestive tract. It also puts you at a greater risk of developing a couple of different cancer types, such as the cancer of testicles, ovaries, rectum, breast, pancreas, stomach, cervix, lungs, and colon.

The problem with a few of these risk factors is that they exist, and you cannot do anything about it (like inherited genes). However, despite the presence of a few risk factors, there are a few things that you can do to prevent the development of ovarian cancer. It will also be essential for you to know that regardless of your risk factors, there may be a chance that you may never develop cancer. However, that should not prevent you from taking adequate measures to reduce the probability further. These include:

Any female who has used oral pills for birth control for a minimum span of three months reduces their risk of developing ovarian cancer. Moreover, the longer is the consumption of contraceptives; the lower is the overall risk. Your reduced risk goes on for several years, even after you stop the consumption of the pills.

A hysterectomy, which involves removing the uterus, or a tubal ligation, which involves the tying of the fallopian tubes, also reduces the risk of developing ovarian cancer.

Where Is Your Pain Coming From Internally? Here’s How to Tell

When you’re in pain, it can be tough to tell what’s going on and where your discomfort is…
byAbdullah Hussain
Read More

PCOS and Hair Loss: Everything You Need to Know

Lemon water is one of the most popular and versatile drink for weight loss. Some people drink it…
byHardik Pandya
Read More

Want to Gain Muscles This Winter? Check out these Winter Workout Tips

During the winters, the fitness enthusiasts want to get the lean and shredded body they can flaunt in…
byAbubakar Bashir