Why is the upper Mustang called Mini-Tibet in Nepal?

Mustang and Upper mustang Introduction Mustang a word derived from the Tibetan word which means,” Plain of  Aspiration”.…

Mustang a word derived from the Tibetan word which means,” Plain of  Aspiration”. Mustang an ancient forbidden kingdom situated in northern Nepal, bordered by the Tibetan Plateau and wrapped by some of the world’s tallest peaks above 8000-meter tall peaks. The whole district lies under the Annapurna Conservation Area which is the largest protected area of Nepal.

Upper Mustang the former kingdom of Lo, and which also a remote and isolated region of Nepal. Until 1992 October a restricted area for foreigners and which was the most preserved region in the world. As all of the population still speaks traditional Tibetian Languages,  Tibetian culture has been the most preserved isolation region from outside the world. The life in Mustang depends on tourism, animal husbandry, and trade. On upper mustang, the development works are increasing day by day at a higher pace.

On Upper Mustang people are preserving Tibetian culture and traditions, they speak the Tibetian language their lifestyle also similar to Tibetian and Upper Mustang as similar land as Tibet and it’s also a part of the Tibetan Plateau. So, that’s the reason Upper Mustang known as the Mini-Tibet in Nepal. 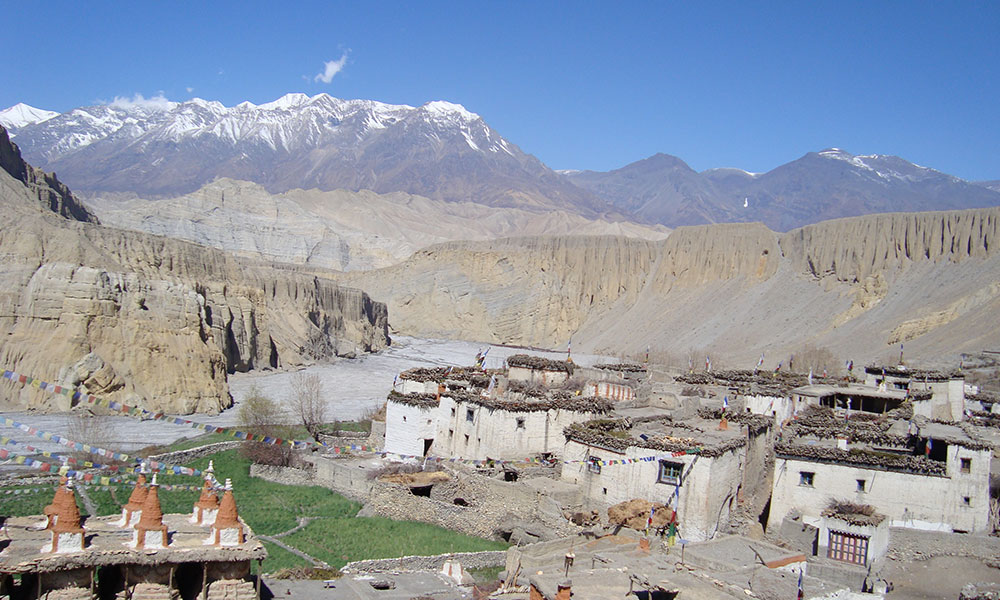 Landscape and vegetation of Mini Tibet

Upper Mustang Trek is the high Deserted region with Tibetan influence. It has less vegetation with structured land. It is filled with the tree-less barren landscape, a steep rocky trail up and downhill. This region a unique example of a high altitude environment that is similar to that of the Tibetan Plateau. Mini-Tibet has some dominant plant species and every species with different height levels on which no difference can be found throughout the year.

The Upper Mustang is famous for the name of Mini-Tibet. Which is a high influence on Tibetian. People in this region mainly speak the Tibetian language and the upcoming generation also mainly uses the same language. People always celebrate the festival as similar to Tibetian’s. While traveling to Upper Mustang it’ll feel similar to traveling to Tibet. This area also restricted until 1991 for foreign travelers which done to preserve their culture.

The Upper Mustang trek passes through the Kora La Pass and Himalaya west in Sikkim which also an ancient trade route between Nepal and Tibet. China’s annexation of Tibet until the route remained. Most people live near the river of Gandaki. Currently, the widely used road Araniko Highway and China National Highway.

Mini-Tibet provides you with a spectacular Trans-Himalayan mountain area and the scenic beauties of the different landscapes. While traveling you can start from the world’s deepest gorge Kaligandaki Region into the World’s highest regions of Lo-Manthang Valley. Mini-Tibet shows you some highest peaks of the world which are above 8000, passes, glaciers, and alpine valleys. Mainly you can find different kinds of houses on mustang which made from stone and sun-baked mud bricks.

Can we travel to Upper-Mustang

Till 1991 foreigners were restricted from visiting Mini Tibet, which done to preserve their culture and traditions from outsiders. But after that, the government of Nepal has opened it for traveling. You’ll need a permit to visit Mini-Tibet. There are some firm controls to get a permit from the Immigration of Nepal.

How long does it take to visit Mini-Tibet

Is it safe to visit Upper-mustang

As the high deserted area of Nepal safe to visit Upper Mustang. Upper Mustang is at 3800 meters above sea level and also known as the cold desert. You have to trek through some hills and mountains which will be easy. It is a region that remains dusty throughout the whole year.

How much does it cost to visit Upper-Mustang

Upper Mustang a high altitude region which is situated on the northern side of Nepal, which can take up to 20 days also. While trekking it can cost a bit high. It can cost around (1700$-2000$ dollars) to visit upper mustang. The price higher because the permits are expensive. At the Upper Mustang hotel, food, and Beverage, fuel also expensive.

Upper Mustang (Mini-Tibet) a restricted legion until 1992 and it is the region that has Tibetian influence. The locals of this area are preserving their culture and traditions and the whole region falls under the Annapurna Conservation Area. So, it requires some permits to reach Mini-Tibet which are:

How to move to a different country during Covid-19 Pandemic

Covid-19 a word you must be well aware of till today’s date. Coronavirus gave an experience of a…
byHardik Pandya
Read More

3 Things You Won’t Want To Miss In Barcelona

Barcelona, Spain’s second largest city, is a place of wonder. It has an unparalleled architecture, mediterranean beaches and…
byJerry Morgan
Read More

Get Yourself a Travel Agent when Planning to Travel

There are several advantages to working with a travel agency, including time and money savings and access to…
byshakya
Read More

Stuck without Travel during the Pandemic? Travel Insurance to the Rescue!

Ever since the flights have stopped operating, we’ve all been sitting duck at our homes with no or…
byTehseen